Long long past the ‘Cinderella’ and ‘Ugly Duckling’ days the Model is increasingly sought after world wide and can command seriously high prices. The nature of the TA 14 chassis meant the design of the long boot gave such style. The radiator was the epitome of early 1950s racy Post War styling. Sadly traditionalists won the style argument and the successor TB 21 reverted back to a traditional Alvis radiator, possibly a little more dull than the flamboyant TB 14 styling.

The TA 14 Motor Show prototype (in fact technically a TA 14) showed the infamous Cocktail Cabinet and Vanity Bar of perfume, lipstick and powder compact. Many ‘Cocktail Cabinets’ have been retro fitted into restored TB 14s but no one to date has taken on board the beauty bar. Is any owner up to the challenge? The powder compact can be closely replicated by one by Guerlain, ‘Les Meteorites’.

For anyone who enjoys the Hercule Poirot TV series you will see frequent use of Cocktail shakers. Look closely at the Motor Show Prototype. In the door is a lightweight Cocktail Shaker and not glass decanters that are for spirits. Thus one really should be carrying the metal Shaker! After all Martinis should be shaken not stirred!

For more about TB 14s go to the TB 14 Gallery to see the extensive numbers of TB 14s in there different colour schemes and some with the very fetching white wall tyres.
For anyone who was interested in EDB 677, chassis 23582, she has been snapped up now and will be restored and domiciled in Austria. Coincidentally in this photo from 2016 at International Alvis weekend the red TB 14 also lives in Austria, will they meet again?

With the TB 14s and a very few TA 14s being factory fitted with twin carburettors some current owners are seeking to fit twin carburettors. Should anyone have a spare twin carburettor for sale I can put you in touch with owners seeking to purchase the item.
Look back at a few earlier Posts and the spares needed are still required so in this mild weather does something lurk at the back of the garage that might be put to good use by another owner?

Still a very good choice of TA 14s on carandclassic, 7 Saloons including the Duncan on the main site plus 5 Dropheads. No TB 14s shown but I might know of one.

A new book, to add to your Alvis Bookcase Section should be coming out in July, ‘Alvis Society-A Century of Drivers’. by eminent Motoring Historian Dave Culshaw. The book details famous owners and drivers plus other notable Alvis items of interest. Yes there are of course Fourteens covered in the book that has the added benefit that it has been produced with the full cooperation of the Alvis Car Company, sister Company to Red Triangle. 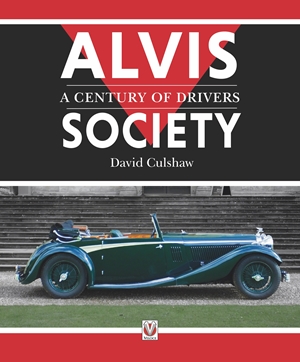 For those who enjoy a good read, the Motoring Magazines of the mid to late 1940s can be most entertaining and the world looks rather different.

Interesting to note that as well as building the Leonides aero engine at the same time as the Fourteen, printing machines were manufactured. Does anyone still have one?

One tip of the day encompasses the ever present problem of how to run a Fourteen with the heater, lights and windscreen wipers operating or may be just the latter two as the heater was an optional extra. Heaters were still very much an optional extra. In the late 1950s the owner of Tickford chassis 21830 had the perfectly serviceable heater removed on the grounds that it would make the family go soft. (My Dad!!!!!)

Many of the early Fourteen chassis were bodied by small coach builders and this was actively encouraged with the pricing of the running chassis.

Another clip from ‘Autocar’  highlights the price with the standard Mulliners Saloon body shows the value of £10 when a pound was a pound.

So what now for the next decade and indeed the next Century? The latest on the horizon in the US is  changing the petrol engine to electric power. Cannabalised parts from crashed Teslas are in demand! Emission standards and reliability are the key drivers. Possibly not in the true spirit of our cars but rather tempting with the increase in so called Smart Motorways that are quite unnerving.

So now it just remains to wish everyone and their Fourteens a Very Happy New Year.

This entry was posted in Uncategorized. Bookmark the permalink.